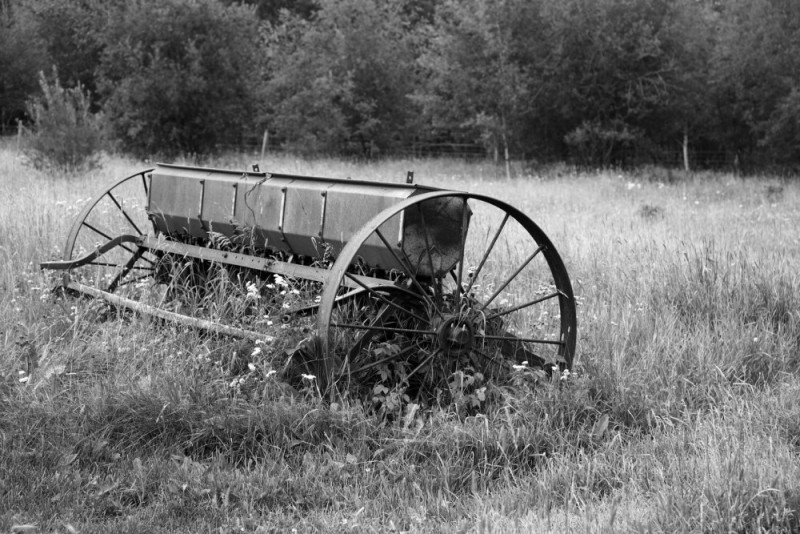 Posted by Michael Rawluk (Williams Lake, BC, Canada) on 22 November 2007 in Landscape & Rural and Portfolio.

This was shot in near Gordondale Alberta last August. Kind of a cool name, Gordondale.

By the way, Happy Thanksgiving to the United Statesian people who are heading into that big day. We had our in Canada Last month. Why do we celebrate in October and the USAians celebrate in November when the first one was in July?

July 30, 1578: Martin Frobisher (1539-1594) found some people behind Anne Warwick Island (Kodlunarn Island), where they had been lost. The Reverend Robert Wolfal conducted the first Thanksgiving service in North America, with 100 men. George Best was the chronicler of this expedition and also conducted a Thanksgiving meal.

a lost combine. I loved it

Excellent image, Michael!! And a perfect title really... this is so Alberta.

Hope those new fingers of yours start co-operating a bit better... in the mean time, it's a down right hilarious slip-up and believe me Leah will absolutely have a side splitting laugh!!

This is a superfine shot! Perfect for black & white.

A Beautiful slice of rural life, somehow so gloriously evocative of timelessness in the b&w. I like it! :)

i sometines miss the peaceful countryside

Hey I really like the processing of this one! Wonderfully done!!! I sure do miss my home on the praries!!!

Great find Michael! I think I remember my grandfather having one of these on the side of the barn when I was a child - a leftover from when my great-grandfather was farming. It was always surrounded by weeds and never used, kind of like this one.

A feeling of peaceful nostalgia! Lovely black and white tones...

I simply love this, it reminds me of when I was a little girl spending time on my great uncles farm and his old pieces of machinery around the place, it brings back lovely memories of me wandering around with my camera...beautifully composed, B&W gives it more of a rustic feel, well done!